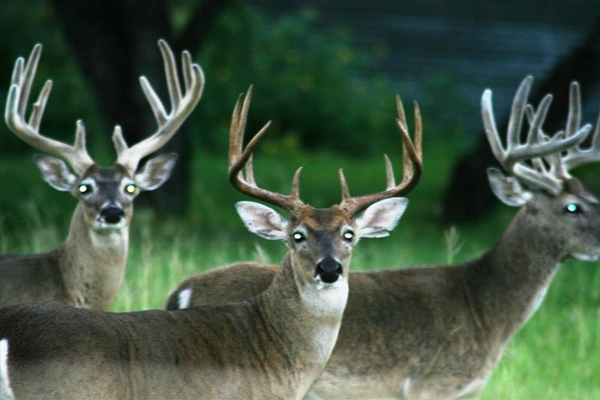 Who out there can honestly say that deer antlers don’t get them excited?  Whether we manage deer as a profession or a passion, growing bucks with the big antlers is on our minds somewhere down the line.  From the earliest drawings of our ancestors on cave walls, we have always had a fascination with antlers–their size, their shape, their oddities, their growth.  Why else would we get up well before daylight and brave the harsh elements to pursue antlers and their owners?

But, do you fully understand the antler growing cycle from start to finish? It is an amazing process for sure and something all serious deer managers need to understand and appreciate if growing big antlers are your goal.

What makes an antler and antler, and not a horn?
Antlers differ from horns in that they are shed, or cast, each year and annually reproduced.  Antlers are made of bone while horns are made of keratin, the same material your fingernails are made of.  Horns are a thin sheath grown over a portion of the skull while antlers are completely separate of the skull, held on only by a small section nourished by vitamins and minerals with the ability to start and stop growth.  Horns grow continuously while antlers grow for only 128 days.  Antlers are the fastest growing tissue in the animal kingdom and can be grown only by deer and other Cervids. Horns are grown by cattle, goats, sheep and antelope.

Now, let’s take a closer look at HOW antlers are actually grown.
Antlerogenesis is the term that describes the annual physiological production of antlers.  It is regulated by a series of interconnected processes that are important to understand.  Antler growth is primarily regulated by testosterone levels.  The testosterone levels in a buck’s body are regulated by photoperiod, or length of daylight.  And length of daylight is regulated by the seasons that occur from the tilting and rotation of the Earth.  Because of all of this, the antler growing process lasts only 128 days and cannot be extended or expanded.

When first born in the spring time, a buck fawn has small indentions and hair swirls on the frontal bone of his skull.  At about four months of age, increased testosterone levels help to produce small, flat platforms called a  pedicles.  Pedicles provide the structural base for, and the foundation of, future antler development.  A buck fawn born early in the spring and living under good nutritional conditions will have noticeable, hairy bumps during his first winter.  The hairy bumps are not true antlers but instead dormant pedicles until he is old enough to produce “real” antlers.  At approximately ten months of age, the young buck’s testosterone level increases enough to produce his first set of antlers.  When fall arrives, this little buck will be about eighteen months of age, and referred to by deer managers as a “yearling buck.”  Under ideal conditions and with good genetics, his first rack can have many points but most range from two to six points on average.

As antler growth begins, the underlying pedicle gives rise to new antler material, which at this point is a semi- firm tissue composed of approximately 80% protein.  This growing material is cartilage-like and full of blood vessels.  The nutrient-rich transporting blood vessels rise up through the pedicle as well as form the soft lining around the outside of the growing antler.  The tiny little blood vessels and protective hairs are what we refer to as velvet when a buck is actively growing antlers.  Blood vessel density and capacity is what “feeds” the growing antlers. A healthy buck produces and maintains a high volume of blood vessels, while one whose body is stressed will not.  The velvet is also full of a dense network of microscopic nerves.  The nerves make the velvet covered antlers sensitive and helps to protect the soft growing tissue against damage.  The nerves may also make the buck aware of how his antlers are shaped, which will be useful when stripping the velvet and sparring with competing bucks.  The visible grooves on the base and beams of hardened antlers are the impressions left by the blood vessels as it grew in velvet.

What role does nutrition play?
Normal dietary intake cannot supply enough nutrients and minerals to support the rapid growth rate of the new antlers.  Remember, antlers are the fastest growing tissue in the animal kingdom, and consequently require huge demands on the buck’s body for quick nutrients and energy.  The buck’s body actually recalls and transfers calcium and phosphorus (the primary building blocks of antlers) from the entire skeletal system and the blood transports these minerals to the growing antlers via the new blood vessels.  Research has shown that the bulk of the minerals are taken primarily from the ribs and sternum area creates a temporary condition of osteoporosis–a degenerative bone disease common in older humans.   In deer, however, this condition is only temporary (unlike in humans) and once the antlers are fully mineralized, the bone density returns to the normal pre-antler growth levels once again.

As the days become shorter, the pineal gland (attached to the brain) senses the shorted daylight/photoperiod (through the optic nerve) and sends the signal to the testes to increase testosterone levels.  As testosterone levels increase, the antlers become mineralized and begin to harden.   Once completely mineralized the ever-increasing testosterone levels cause the blood flow to cease and the velvet dries and begins to split and crack open.  The buck then begins to rub his antlers on small trees and shrubs to remove the dried velvet and this rubbing action mixes the brown pigment in the plants (called tannins) with the remaining dried velvet blood to create the familiar brown color commonly found on antlers.  Bucks that either rub on plants without tannins or held in captivity without the ability to clean their antlers will have snow white antlers when stripped of velvet.

Testosterone levels peak in the breeding season and decline shortly thereafter.  The decrease in testosterone triggers osteoclasts that erode the base of the antler at the pedicle, resulting in the antler falling to the ground.  Osteoclasts are bone cells that are associated with the dissolution of unwanted bone.  Once the antlers are cast, the amazing growth cycle begins all over again in approximately two weeks.

The scab that forms over the wound left by the cast antler heals and becomes covered with fine, thin hairs.  The fine-haired skin forms the beginnings that will nourish and protect the growing antlers for the next four months.

Management implications to consider:Mother Nature mandates that the whitetail buck’s antlers are secondary to the health of the body.  The body takes precedence, or priority, over antlers in regards to bone health, internal organ health, protein and mineral consumption and overall total physical health and healing.  This means that if the buck’ s body is lacking in nutrition or otherwise stressed, the antlers (and the 128 day growth cycle) takes a back seat nutritionally until the body is fully healed and recovered.  Managers must make certain that the bucks exit the rut in as good of physical condition as possible so that healthy antler growth begins on the first day and is not delayed in order to maximize antler growth time and energy.

As you can tell, antlerogenesis is an incredibly detailed process.  Antlers are, basically, grown year around from a nutritional perspective and it would do managers well to keep that in the front of their minds.  Habitat and herd management all have direct and lasting nutritional impacts and those impacts will affect future antler growth.