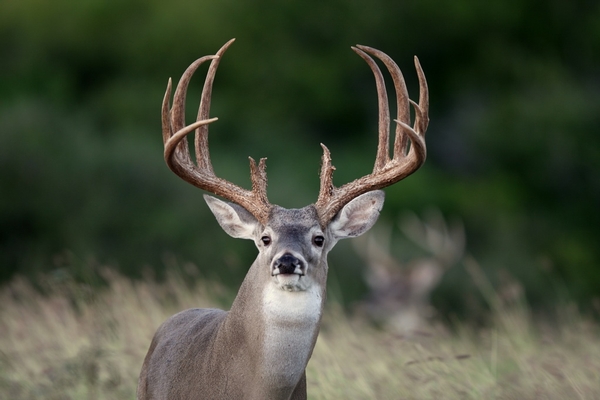 Supplemental feeding is just that–a supplement.  When the rains are right and the stars line up, we can’t even compete with Mother Nature.  As you likely know, when it rains, deer won’t eat the protein.  They eat it only when they need it, when the habitat is stressed or defoliated. In the pasture, the deer makes the choice to eat or not to eat protein.  And his or her stomach tells them when and how much to eat.  Some deer eat two bites and leave while others camp out and eat four to six pounds of feed per day.  This is why the amount of protein on the bag means very little.  Don’t get caught up worrying about the highest amount of protein.  You need to worry about the quality of the feed, as a total package, so that when a deer does eat it, he/she gets what they need and when they need it.

Protein feed is not the magic bullet.  It simply is a supplement to level out the peaks and valleys of the nutritional swings the habitat typically goes through as the seasons or weather patterns change.  It is not a “cure all” designed for a specific period of time.  It is meant to be used year around and to SLOWLY and STEADILY help the deer stay in top physical condition.  By waiting until July or August to feed the bucks something extra or special is way too late.

A buck begins growing his antlers approximately one week after shedding the previous set.  When he is malnourished or pulled down from the rigors of the rut and lack of rainfall his body go into a self-preservation mode (thus why skinny bucks shed earlier) in order to stay alive.  If supplemental feeding was used during post-rut, the buck would not sink to such a low nutritional level and his body would not have to play “catch up” from a nutritional perspective.  As the body suffers, so do the antlers.  Antlers are a bi-product of nutrition.  Providing supplemental feed ensures that the buck will have enough to eat no matter what the native forage is providing so that his body will be healthy enough to support the growth of antlers to his full genetic potential.

The same benefits go for the does.  If you provide an additional source of feed, the does will be healthier and able to carry, deliver and nurse a healthier fawn(s).  Fawns that receive a good start at life get bigger and stronger and therefore increase their chances of survival, especially as winter approaches.

Works:  Good quality feeders that keep out moisture and are in a feed pen at least 60’ diameter to exclude non-target animals such as livestock, feral hogs and javelina.

Doesn’t Work:  Leaky feeders that let in moisture to spoil feed or placed in a feed pen so small that deer are afraid to jump in or only a couple of deer can get in at any one time.

Doesn’t Work: One feeder near the ranch house, or several feeders bunched up only compounds the problems.

Works: Keeping protein feeders filled from post-rut through shedding of velvet, year in and year out.

Works:  Placing protein feeders in areas of the ranch away from high traffic and near escape cover.

Doesn’t Work:  Placing feeders by the main roads with high traffic or in wide open fields.

Works:  Use protein feeding as a part of your overall management program and after you have deer densities reduced to what the habitat can support.

Doesn’t Work:  Keep providing feed with no plan for reducing the additional deer you are growing with the feed and allowing population to go uncontrolled to the decimation of the native habitat.

Works:  On small, low-fenced acreage, get all neighbors cooperating with harvesting and providing protein.

Doesn’t Work:  Be the only one in the neighborhood feeding protein while the neighbors are shooting every two year old buck that crosses the fence.

The immediate benefits of a proper supplemental feeding program include increased body weights.  During the second year fawn survival rates will improve sharply and on or about year three, improved antler production will be evident on those young bucks raised on the feeding program.  As  you can see, supplemental feeding is a long-term project and should not be taken lightly or sporadically in order for it to really work.