Facts About Deer That You May Not Have Known 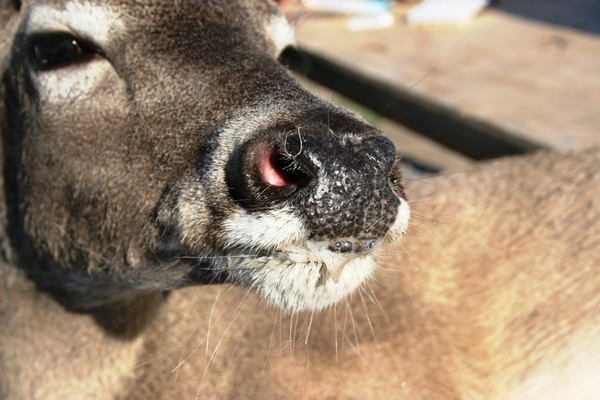 * White-tailed deer, mule deer, black-tailed deer, elk, axis deer, fallow deer, and moose all belong in the Family Cervidae. This family of deer is characterized by an absence of a gall bladder, feet are actually four toed (dew claws count as toes), all have 32 teeth (except the elk), and the males grow antlers.

* A deer’s eyes are large and set on the sides of their head to give them a 310 degree field of vision.  They also have a tapetum lucidum, which is a reflective layer of pigmented specialized epithelial cells in the back of their eyes which collects available light to allow deer to see better at night and is responsible for the “eye shine” present in many nocturnal animals.

* Deer have pilo erector muscles in the skin that raise the hair coat up, much like humans get “goose bumps”.  This is to increase air space for insulation and also used in behavorial posturing (primarily among bucks).

* Deer deposit fat first in bone marrow, kidney and pelvic areas.  Fat is deposited last over the ribs, brisket and tail head and deer lose fat in the reverse order.

* Deer have approximately seven glands that are very important in their daily lives.  The forehead gland is most active on bucks during the rut, but also used as a business card of sorts for identification purposes.  The preorbital glad is located in front of the eyes and is used primarily to deposit scents for territorial  marking.  The interdigital glands are located between the two larger hoofs and are used for tracking each other or communicating to a large group of deer (a buck follows a doe’s scent via this way or when a deer stomps its feet to warn others of danger).  The metatarsal glands are located between the knee and foot along the inside of the rear legs and thought to be used in circulatory and thermoregulation purposes.   The tarsal gland is located along the inside of the hind legs just inside the knee area and is used to identify individual deer, express dominance and breeding conditions, and other smelly responses.  The gland actually reacts to the urine when deposited on the hair to produce the musky odor that most hunters are so familiar with.   The vomeronasal glands are located within the nostrils and upper palate of the mouth and are used for taste and smell and the receptors are sensitive to non-volatile compounds so that they can gauge a deer’s reproductive status.  The pineal gland is located in the brain and detects changes in day length, or photoperiod.  This gland influences the pituitary gland to produce hormones that influence not only antler growth, shedding of velvet and the hardening of the antlers, but also male and female reproductive cycling.

* The four chambered stomach of a deer include the reticulum, rumen omasum and abomasum.  The reticulem is the first compartment of the stomach, a honeycomb looking thing that simply holds and collects swallowed material.  The reticulum is the fermentation vat with the large papilla (hair looking things) on the wall to increase absorptive and mixing surface area.  The omasum absorbs fluids with its many folded pouches (which increase surface area and grinding ability) and the abomasums is considered the true stomach where glands produce acids which finally digest the contents.  Beyond the stomach, the small intestines are where the primary nutrient absorption occurs and the fluids are finally absorbed in the large intestine.

* The liver produces bile since there is no gall bladder, and digests the fats and detoxifies any substances such as toxins that are eaten from certain plants.

* Deer are seasonally polyestrous, meaning they only cycle during certain times of the year and usually come into estrus (heat) on 28 day cycles.

* Males are only fertile when they have hardened antlers, infertile the remainder of the year.