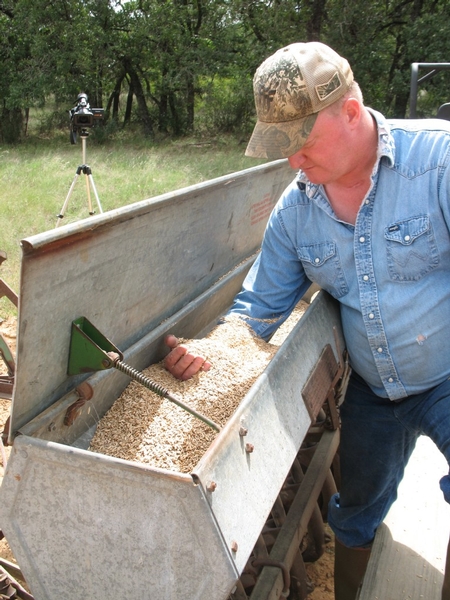 Background information:
Four deep sandy soil food plots were plowed and planted on the Ledbetter Ranch in northern San Saba County.  Topography is slightly rolling throughout, but each food plot was basically flat or terraced throughout.   Two separate large plots were divided in half length-wise and planted with different species for comparison purposes.  Right down the center of each large field, one narrow strip was planted (hand broadcasted) to plant both turnips and rape.  Exclosures were constructed at each intersection to fairly and equitably judge plant success and deer preferences.  One long and narrow field was planted with a mixture of wheat and oats together and one exclosure used in the center of the field.  One small plot, the Game Patch, was planted via hand broadcaster with Austrian Winter Peas, Madrid and Mixed Clover Seed.  This plot was very small and no exclosures were present.

8-28-04:
Four individual food plots were planted this year to determine what species grew best in the deep sandy soils and to determine which species were preferred by deer as they grew.  One week prior to planting, nine inches of rain fell on the property, so soils were just dry enough to plow and plant.  The disc took the ground extremely well due to the moist conditions and an excellent seedbed was established in all plots.  A grain drill was used to plant most seeds and a light cyclone fence section was used behind the drill as a drag.  Light rains fell while planting was taking place.  All plots had exclosures constructed immediately after planting to eliminate foraging animals in order to gauge growth rates and browsing pressure.  It took a total of seven hours to plow, plant, and construct the exclosures that day.

9-4-04:
Exactly seven days after the planting, ALL seeds were up and growing.  The Buck Forage Oats (BFO) were four inches tall while rape and Black-eyed Peas (BEP) were very short but present.  The tallest BEP was four inches tall, most were shorter overall though.  Both clovers (Madrid and Clover Seed Mix and Austrian Winter Peas (AWP)) in the Game Patch plot were 1-2” tall and growing well.  It rained 0.6” one day after photographing all plants.

September 4 to October 10, 2004:
Only 1.5” of total rainfall fell on the plots.  The rains came in several small amounts of no more than 0.5” at any one time.  Photos were taken of all plants on 10-10-04.  In the Bender Oat Patch, every BEP was eaten and removed by deer (except those inside the exclosures).  Rape was slow but still growing, showed signs of browsing pressure and appeared to be drying out somewhat.  Purple-top turnips were growing well with very little disturbance or use showing.  There were many deer tracks observed in all plots and the triticale, Buck Forage Oats (BFO), and the Deer Season Mix (DSM) were growing very well.  Lots of deer tracks in the oats, wheat, triticale, and mix sites with some browsing signs obvious.  In the Game Patch, the clover mixes and AWP were all but gone by browsing pressure and lack of moisture.  This dry spell had the deer on the move searching for nutrition and they obviously found each food plot.  Looking inside each exclosure, differences were obvious as all inside was much healthier and taller than anything outside.

10-31-04:
Since October 10, 1.5” fell on all plots.  All plots were doing well, except clovers and AWP in Game Patch.  They are basically wiped out from intense browsing pressure and earlier dry conditions.  Signs of utilization on both turnips and rape were obvious now and triticale growing very well.  ALL BEPs are gone, except those inside the exclosure-that are now blooming and pea pods are 10” long.  Turnips are approximately tennis ball sized and very productive looking.  Many grass burr and silverleaf knightshade growing in all plots due to earlier soil disturbance.   Excellent growth in both BFO and DSM.  Of the two, planted side by side for comparison reasons, it appears that the BFO are outgrowing the DSM slightly and appear to have more leaf volume and density throughout.  There is ample browsing pressure on both species and they look in excellent conditions, very green and lush.  Wheat is growing well but slow.  It appears thinner than the oats, but doing well.  Not as much pressure on the wheat at this time.

11-27-04:
For the month of November, 5.5” of rain fell on the plots.   All plots are in excellent condition and look fantastic.  Hunters report few daylight deer observations while hunting, however, there are many deer tracks present, indicating that deer are using them more at night to avoid hunting pressure.  Exclosures beginning to show obvious signs of pressure from the outside.  Due to increased moisture, it appears that the deer are either slowing down on using the plots or that the plots are exceeding the browsing pressure as each plant species is thriving and looking extremely healthy and vigorous.

12-04:
Only 0.37” of rain fell on plots in December and the weather had gotten much colder.  Several light freezes have taken place early in the month.  Christmas Day temperatures were 22 degrees with a 12 degrees wind chill factor and hard ice on the ground.  Most all green stuff has disappeared, or in the process of, and deer are turning their full attention to the food plots and feeders.  Food plot daylight observation activity has picked up some, but not too much.  A full moon during the Holiday season kept most deer active at night and less during the day.  Food plots began showing signs of pressure and stress.  Exclosures showing dramatic differences now.

1-05:
2.5” of rain fell on all plots in January.  There were three hard freezes in late December (see above) and three in January.  Food plot daylight observations picking up both mornings and afternoons.  Exclosures proving valuable, very visible signs of stress outside each exclosure.  BFO, DSM, triticale, wheat, turnips all doing very well.  Rape not growing much, being kept very low to the ground by both deer and freezing weather.  Turnip tops froze off and deer finally began eating the bulbs in earnest.  BEP inside exclosures froze and died, about twelve inches tall while standing dead and solid black.

2-05:
Three separate rains totaling 2.0” of rain fell on the plots in February.  Last day of doe hunting season had five bucks and eight does and fawns in the BFO and DSM plots.  They were busy feeding and not much else.  All plots were showing severe browsing pressure with no clear preference over any particular plant.  Wheat was growing well but getting browsed very heavily.  Wheat was thin overall, but grew vigorously and deer kept coming to it.  Triticale was holding up well with lots of utilization.  Rape never really recovered, remained low and slow growing, even inside the exclosures.  All but a few turnips existed in the plots, all the tops were gone and few bulbs could be found.

3-24-05:
Total rainfall was  2.0” for the month of April.  Photographed all plots and took down exclosures.  Huge and dramatic differences outside versus inside exclosures, a very good demonstration of utilization in my opinion, well worth the effort.  Most plots were approximately 2” tall overall with severe browsing pressure throughout.  Where the triticale and DSM were planted side by side for comparisons, the DSM was obviously shorter and hit harder than the triticale.  Lots of utilization on the triticale, but the DSM showed more when compared side by side.  Both grew very well for a long time through six different freezes and performed very well overall.  Inside the exclosures, the turnips were softball sized on average and the tops were frozen off.  Outside the exclosure, no turnips of any real size could be found, average of perhaps golf ball size of the handful that remained.  We were able to harvest all remaining turnips inside the exclosure for our supper that night and most were excellent fare.  Where the BFO and DSM were planted side by side for comparisons, there were no obvious preference signs, however, the BFO did appear to be more vigorous and robust looking with more leaf volume remaining.  Both species grew very well throughout the year, through six freezes and did very well.  Early on, it appeared the BFO were more preferred by the deer; however, by the end of March I could not see any obvious differences.  Inside the exclosure, both the oats and wheat were headed out.  The wheat measured 40” tall and the oats at 34” tall.  Rape was not more than three inches tall inside the exclosure and one inch outside.  The rape never appeared to get established and didn’t do very well in my opinion.

Conclusions based on this experiment:
Buck Forage Oats, Deer Season Mix, Triticale, wheat, and Purple Top Turnips will grow very well on this deep sandy soil site with a moderate to heavy deer density.  Rape, Black-Eyed Peas, Madrid Clover, Clover Mixes and Austrian Winter Peas did not perform very well due to either lack of moisture or browsing pressure or a combination of the two.  The deep sandy soils do not retain moisture very well and most legumes cannot recover from moderate browsing pressure.  Early December freezes also hampered any or most legume production when the nutrition was needed the most by the deer.  The oats, wheat, triticale, etc. performed very well throughout the wet and dry months and withstood six different hard freezes and heavy deer utilization.