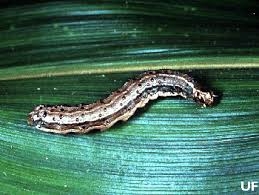 Attention all farmers, ranchers, and deer hunters. The fall armyworms are here once again and causing problems for everyone. Damaging populations of the pests have been reported in north, central, and south Texas again this year, especially on newly established small grain pastures (food plots) and established bermudagrass fields.

The fall armyworm, Spodoptera frugiperda, are likely to be present from August until the first frost. Populations can reach damaging proportions following fall rains while temperatures are relatively warm. Fall armyworm moth flights are carried here by air currents from Central and South America when conditions are favorable. As temperatures decrease, the life cycle of the armyworm slows.

The fall armyworm is identified as a small (1.5” at maturity) striped, light green, black or even brown caterpillar with an inverted “Y” on the head and four black dots on the back of the tip of the abdomen. They feed continuously on lush, new growth grass and grass-like foliage and are most active early and late in the day. Like their cousin the cutworm, fall armyworm caterpillars damage grass by chewing plant tissue. However, cutworms are night feeders while fall armyworms feed throughout the day. The first clue of an infestation may be the appearance of brown circular patterns within an otherwise healthy area. From a distance, these patches can look like drought stress. Such areas may first appear around the field edges near fence lines with overgrown vegetation or wooded borders.

Fall armyworm caterpillars will feed on almost all forage grasses, as well as corn, cotton, alfalfa, sorghum and approximately 100 additional plant species. The adult fall armyworm is an ash-gray moth with a wing span of approximately 1.5”. The front wings are mottled and have white or light gray spots near the tips. The back wings are white with a narrow, smokey-brown edge. They have an average life span of two to three weeks. The female moths lay eggs at night in masses of up to several hundred on light colored vegetation and the underside of tree branches. The eggs are light gray covered with grayish fuzz. The eggs darken with maturity and hatch within two to four days and all the eggs hatch about the same time. The tiny black-headed larvae (caterpillars) spin down to the ground on silken webs and begin to feed. As they grow, their bodies darken and noticeable stripes appear. The destructive caterpillar stage lasts two to three weeks. At this point, the larvae burrow into the soil and form pupae. The moths emerge in about ten to fourteen days, beginning the cycle again. Under prime growing conditions, there may be as many as five generations produced.

The decision to treat for fall armyworms depends on the stage of the armyworms and the intended use of the forage. A population of three or more worms per square foot is a reasonable treatment threshold. Small armyworms are much easier to kill than larger ones, so timing of treatment is very important. If infestations are detected too late, the damage may already have been done.

Controlling armyworms may be as simple as mowing the field in question or insecticides may be used.  Formulations of Sevin, Lannate, Lorsban SG and methyl parathion may be effective but pay close attention to grazing restrictions and re-entry periods. Apply insecticides early or late in the day because larvae (caterpillars) are most active at these times. Control of caterpillars longer than 3/4” may be poor and control in tall or thick stands of grass may also be poor. Significant numbers of armyworms may reappear within five to seven days after treatment so fields should continue to be monitored until the area experiences cooler temperatures and plants are more advanced in their growth.