The Magic of the Rut 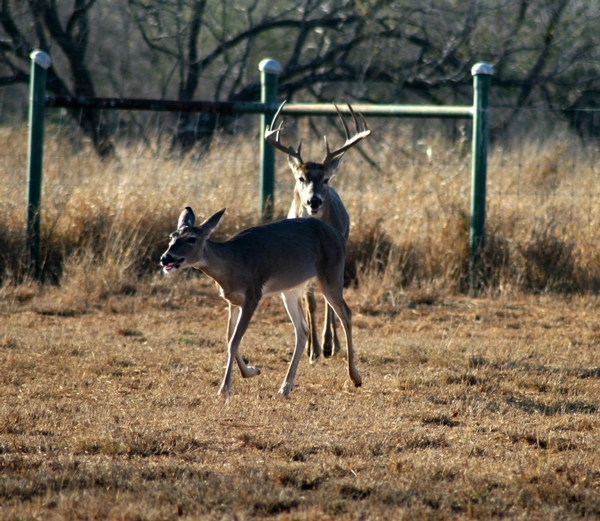 What, exactly, is the rut in whitetail deer and why do hunters enjoy it so much? What causes the normally secretive and elusive mature bucks to temporarily lose their minds and wander out into a wide open field during the hunting season? In this two part series, we will take a deeper look into the science and biology of this incredible, annual, phenomenon hunters call “the rut”.

The drive of self-perpetuation is a strong one. It is more than just “survival of the fittest” and includes a myriad of hormone and chemical responses throughout the body triggered by nutritional and environmental factors alike. Assuming the animals are healthy, let’s look closer at exactly how the rutting behavior happens.

Courtship: Running is a large part of the whitetail’s courtship behavior. Bucks travel great distances in search of females that are nearing receptiveness, or estrous. They use their nose exclusively to determine if a doe is getting close as they travel from doe group to doe group in search of a potential mate. During this time, bucks may lose up to 30% of their body weight as they feed and rest rarely during such extensive travels. The females that are nearing estrous, but just not quite ready yet, will run from the buck’s asserted charges. At first a trot, her fawns will usually follow as they can. As her receptiveness increases, the chase tends to resemble a track meet and the fawns are usually then left far behind. As the receptiveness of the doe peaks, the chase slows down and the two spend more time closer together, even bedding down together at times. Once the doe is completely receptive, she will stand for the buck and allow him to rest his head on her rump. Soon thereafter, copulation takes place but lasts only a few seconds. After mating, the pair split up and the buck begins the same cycle over and over again. In a nutshell, the peak of the rut is simply the period when most of the females are in estrus and the healthy mature females dictate the timing of the rut.

Timing: The timing of the rut depends on your general location, or latitude, where you hunt. Except near the equator, the rutting season is tied to the photoperiod, or day length. The diminishing ratio of daylight to darkness triggers the start of the reproductive cycle each year in both sexes. Because photoperiod is tied to latitude, the rut progresses in North America from the north being the earliest and the south being the latest. In a nutshell, photoperiod triggers physiological changes that lead up to the rutting activities.

Nutrition: Because the actual rut peak is dictated by adult females coming into estrous, the nutrition and body condition of the females in the months proceeding up to the rut plays a key role in the exact localized timing. Weather and temperature also are factors, but once the photoperiod has prepared the females physiologically for breeding, cooler weather and a drop in the barometer certainly helps in getting the deer on their feet more often. Unseasonably warm weather suppresses rutting activity. Obviously, a body that is lacking from adequate nutrition cannot and will not function properly. In this scenario, females fail to enter heat, or estrous, and therefore can’t get pregnant or cannot maintain their pregnancy which ends in the same result. The males can’t maintain the physical strength or their hardened antlers long enough to participate and thereby cannot contribute to the gene pool.

Biology: In both sexes, a pea-sized gland near the center of the brain is called the pineal gland and it receives input from the eyes that triggers the release of a hormone called melatonin. As the days become shorter in the fall, more melatonin is secreted and this increased melatonin acts on the pituitary glands and regulates the release of a host of different hormones. Such annual cycling is responsible for the different hair coat changes, food intake levels, antler growth cycles, ovulation and timing of the overall rutting activities. If the pineal gland is damaged or interrupted in any way, the timing of these natural seasonal cycles is compromised.

In females, follicles in the ovary produce estrogen—the hormone responsible for the doe’s mating urge. Another ovarian hormone, progesterone, acts with estrogen to promote optimum heat—or the time when a doe will permit actual copulation. The rise in estrogen eventually causes the release of a mature ovum for the buck’s sperm to fertilize.

In males, the testicles are separated into three production phases: primary development, full production and resting. The phases are directly related to the onset of antler growth, the shedding of velvet, and the antler casting period. The growth and sex hormone, testosterone, is produced to begin live sperm production. Viable sperm production, measured in the billions per ejaculation, increases slowly up until the actual peak of the rut and then begins declining as the mating season ends. Sperm production and testes size are greatest in males aged three to seven years of age, however, buck fawns, given the chance, can successfully impregnate females. Testosterone dictates the course of antler development, so any damage to the testicles during any stage of the antler growth process will usually result in the antlers being held in limbo and may cause severe deformities or a permanent velvet stage to remain, regardless of the season.

So, now you know how and why the rut begins and what triggers and controls it. Next time, we will discuss the management implications and how you can use this information to grow a quality deer herd on your own property.