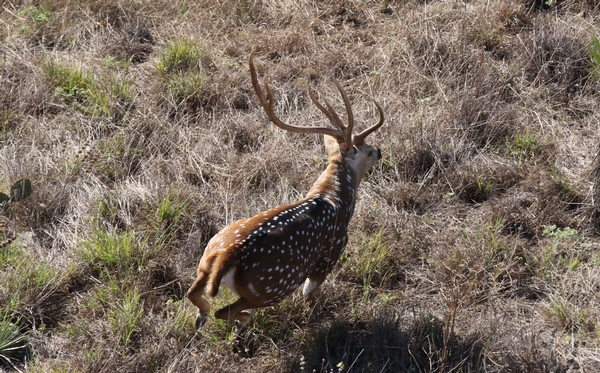 I have been a huge fan of whitetail deer ever since I can remember.  I learned to hunt them with my father as he carried me into the woods and up to his favorite tree stands to sit with him.

Because of my upbringing chasing whitetail deer, I decided to make a career out of them.  I ate, drank, slept, dreamed and chased anything and everything to do with whitetail deer.  I subscribed to every deer related magazine and I pushed lawnmowers hundreds of miles to help pay for each subscription.  My passion became my schooling and my schooling became my career and for that I have been extremely blessed.

But something is changing.  As I enter my fifth decade loving whitetails and my third decade managing them professionally, I see a shift in the paradigm and it concerns me.  My career has carried me into many valleys and thickets throughout Texas managing whitetail deer and I am beginning to see more people managing for OTHER THAN whitetail deer.  I spent my entire life studying, loving, scrutinizing, researching, handling and learning about whitetail deer and demand has remained very strong---until lately.  More recently the calls are more about exotics species—those non-native species introduced from other countries that include critters such as axis and fallow deer, blackbuck/nilgai/kudu/gemsbok and scimitar horned oryx antelope just to name a few.   Whitetails are being dethroned as the king of wildlife in many parts of Texas and there are multiple reasons why.

One of the primary reasons this is happening (because I ask every new client) is the government over-regulation of Chronic Wasting Disease (CWD).  Texas Parks and Wildlife Department has placed such restrictive movement/hunting/permitting regulations and testing requirements on whitetails so many landowners (and hunters) are losing interest.  Another reason is that, as ranches shrink in size, the need for income and year-around use becomes paramount.  Whitetail season lasts only four to five months while the bills arrive all twelve.  Exotic species do not fall under TPWD’s regulatory authority and may be hunted each month of the year and able to generate income as needed.  Exotic species are, as a general rule, very good to eat.  Both males and females are very tasty table fare and provide a steady supply of venison to the families’ freezer and some female exotic species produce impressive headgear that may also be harvested as trophies.  Some properties may not be conducive for whitetail deer such as open grassland (native or improved) or rocky hills instead of quality soils with quality browse plants.  In such cases, many exotic species excel and flourish because the habitat may be more similar to their original homeland.  As larger acreages are split into smaller ones, the habitat becomes more fragmented and exotics are much more forgiving than are whitetails.  The proliferation of high fences are three fold these days—high fences are a requirement of some TPWD permits; maintaining control on smaller acreage is difficult; and exotic species value (hunter demand) continues to increase.   So as you travel down the back roads of Texas, realize there are many reasons you are seeing more and more exotic species in the pastures these days.  I will forever be a whitetail deer enthusiast but it appears that exotic species are here to stay.